The History of Hope for Children

Hope for Children was founded in 1994, the International Year of the Family, by an amazing man, Dr Bob Parsons OBE, who had a vision to help vulnerable children and families in developing countries and the UK who had no other means of support.

Supported by his wife Ann, Bob launched the charity with a bequest of £5,000 from his friend Jim Ward. Bob retired as President of Hope for Children in December 2012, and continued to work tirelessly as a volunteer to raise funds and the profile of the charity. Sadly Ann passed away in August 2011 and Bob in March 2022 but their legacy will always remain vital to the organisation. Below is an extract from Bob's book of how the charity started:

How it all started

By Dr Bob Parsons OBE, Founder of Hope for Children 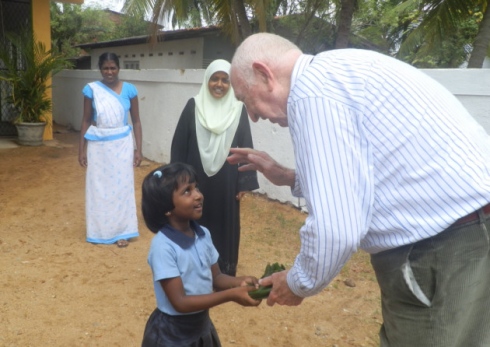 was confronted by a series of events back in 1994. When I retired from the probation service, I was asked by Save the Children to set up a Tracing Programme for orphaned and separated Rwandan children as a result of the war. I refer to notes in my diary:

"We took our tracing programme and our photos to hospitals and  prisons, spread the word and our wings as far as possible... On one of my many wanderings throughout Kigali, I came across a woman who was to change my life and shape my future. Her name was Maisie. She was around fifty years old and illiterate. Her smile was gentle and welcoming. Her story was heart  wrenching.

"Maisie had lost every one of her family members. Her sons, daughter, grandchildren and husband had been wiped out before her eyes. But this woman did not lie down and let her own spirit die. Instead, she took in two orphaned children and gave them the love and security they needed.

"Within a week... several more children had been brought to her door. She opened her heart and took them in. Every day, more children would arrive hungry for love and security. She never turned them away... They slept together in one room, huddled under empty grain sacks on the bare floor, a huge hungry litter of orphaned pitiful souls. Yet in her care they had a roof over their heads, a meal a day, the security of a home, and the love of her huge heart that must have been grieving for her own children and grandchildren...

"That evening, I appealed to several large UK charities to support her and her huge extended family. They all refused.

"Disillusioned, disheartened, I could not get this woman out of my mind. There were so many more like Maisie scattered throughout Rwanda and the world. Who was there to help them in their time of need? With that thought in mind, when my contract was over, and I left Rwanda... I did not forget my experiences. Maisie remained firmly in my thoughts. I could not turn my back on her. Instead I eventually founded a small charity that would give her support and funding. We kept in contact. Proudly she built an extension on her home to house all the waifs and strays.

Since 1994 we have kept Bob's vision at the heart of our projects. As international charity work has moved on from crisis support and welfare so have we - our focus is on long-term generational change, led by the communities we work with - but we are still there for children in our communities who find themselves in crisis, and we stay small so we can really get to know the amazing people, like Maisie, who make change happen.

30/3/22 - It is with deep sadness that we learned of the death yesterday morning of our wonderful Founder, Dr Bob Parsons OBE.

Bob was a truly unique human being, a larger-than-life personality whose humour, love and care for humanity will be remembered by all who knew him. He was a man of action who never let an opportunity pass to reel in a volunteer, inspire and coax a donor or validate the best work of the professionals working for the families we support. He inspired us all with his unfaltering desire to see as much as possible of every pound of funds raised to reach the people who need it most.

In 1994, instead of retiring, Bob founded Hope for Children to make a safe and fulfilling childhood a reality for more of the world’s overlooked, vulnerable and exploited children living in extreme poverty.

Over the past 27 years Bob’s tireless work has resulted in the charity supporting hundred’s of thousands of children all around the world. Everyone who met Bob, children included, felt like they were a part of the ‘Hope Family’ due to his welcoming and inclusive nature.

Bob often spoke about the words his father said to him “In your last moments of life, will you be able to say the world has been a better place for your presence?” This drove Bob to help others and undoubtably the answer was “Yes”.

Back to About Us

INSPIRED? WRITE YOUR OWN STORY OF HOPE