Team return home from ‘Toughest Footrace on Earth’ and raise over £70,000 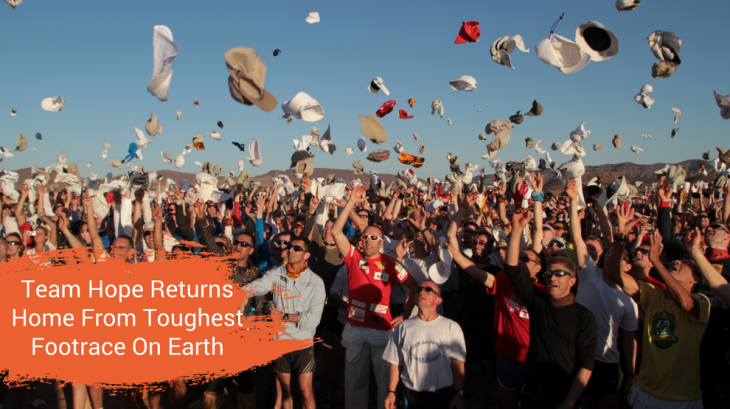 This week, our team of 10 outstanding runners returned to the UK, having taken part in the 33rd Marathon des Sables – the ‘Toughest Footrace on Earth’ – in the Sahara Desert and raised over £70,000 for charity to date.

8 men and 2 women of 4 different nationalities took part in the multi-stage ultramarathon in aid of Hope for Children. Of the 10 competitors on Team Hope, 9 completed the full distance of 251km, including the gruelling 4th day where runners must complete a double marathon, or 86km, across the largest desert in the world.

Throughout this epic endurance event, runners must be completely self-sufficient, carrying everything they need for the week on their back (except for water). This year, they also battled multiple sandstorms, as if things weren't hard enough.

Friedemann Gerhardt from London was our top finisher. After being forced out of the 2016 race through injury, this year he broke into the  top 75 and finished  65th overall. Milly Archibald and Ra D’Arcy Clark both came in the top 100 women in 52nd and 81st respectively, all a phenomenal achievement.

Mahmut Hilmi, an architect from Oxfordshire and the team’s most senior competitor at 72, was the only team member not to finish the race as he fell behind the camel – which signifies the rear of the race – with just 9km to go on the final day.

However, the day before, Mahmut won the hearts of both competitors and organisers when he finally entered camp to finish the double marathon stage after 35 hours of trekking. The entire camp came out to welcome him home, including race founder, Patrick Bauer and eventual race winner, Rachid El Morabity.

The Marathon des Sables is a 251km ultramarathon that takes place across six days in the Sahara Desert. It is often referred to as the ‘Toughest Race on Earth’ with temperatures known to reach in excess 120 degrees Fahrenheit. It attracts competitors from all over the world, and over 1,000 individuals took part in the 2018 event.

We are fortunate enough to have been represented in the race since 2011 and in recent years, we've become the most represented charity in the event...no small feat for a small charity from Hemel Hempstead. This year, Team Hope have already raised in excess of £70,000, which will support our work with vulnerable children in Africa and Asia, such as providing orphans in a slum community in Uganda with educational materials and food parcels.

Murielle Maupoint, CEO, said: “There are moments when we are truly humbled by the efforts people go to in support of Hope for Children – following our team on the Marathon des Sables each year is one of those moments. I’d like to say a massive thank you to our team for putting your bodies on the line in the name of giving vulnerable children the opportunity to experience a happy childhood.”

Elisabet Barnes, 2 times winner of the Marathon des Sables and mentor to Team Hope said: “I couldn’t be more proud of Team Hope for their achievement at the Marathon Des Sables this year, and their displays of superhuman strength and determination to finish. Regardless of the end result, everyone is a winner and an inspiration. Hope for Children offered a fantastic support network that enabled them to take on the challenge with increased confidence, knowledge and ability. It was a privilege to form a small part of this journey and I congratulate all the team for their outstanding efforts."

If you’re interested in taking part in the Marathon des Sables for Team Hope...