A Story of Hope – Meet Ben 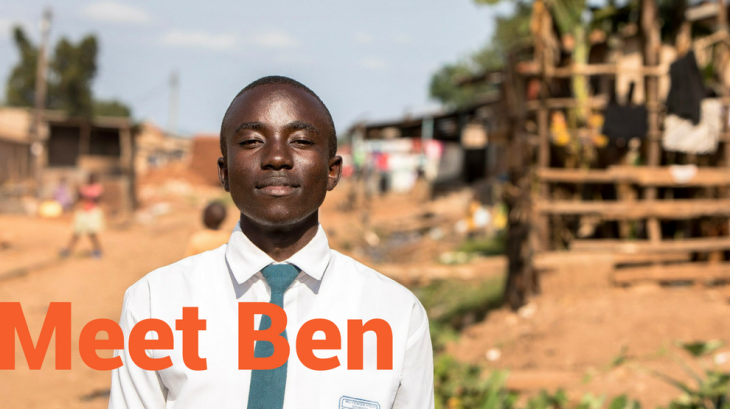 Ben is a smart, determined 17 year old boy who lives with his 7 siblings and parents in the slums of Namuwongo, Uganda. His defining quality is his unwavering desire to give back to his community and help other children who have had a similarly rough background to him.

When Ben was younger, he had a tough childhood. Rarely did his parents have enough money to feed his large family, and his constant hunger meant that he rarely went to school because he couldn’t concentrate. Instead, he would go out onto the rubbish dumps to pick scrap metal and sell it to pay for food. Unfortunately, this is all too often the case for vulnerable children living in Uganda.

Spending so much time in this dangerous situation, he started hanging out with a group of street kids and soon got involved in drugs. More than anything, they masked his constant hunger. At the same time, his dad remarried and left the family, leaving only his mum (who could not work) to support the family, which only meant further stress.

Although Ben could see the route his life was taking, he couldn’t see a way out. He was desperate.

It was at this time that Hope for Children’s social team in Namuwongo heard about Ben, and recognised the incredibly dangerous moment that his life was at. Joyce, our project coordinator reached out to Ben and his mother. She didn’t judge him for who he was becoming, but rather the potential within him.

We quickly enrolled Ben onto our Walk to School Programme, providing him with a uniform. When we asked Ben if he remembered this day in 2009, he said of course because “it was the day he changed his life”. As well as learning to read and write, children like Ben also receive a meal a day at school, which helps them concentrate and maximise their learning in class.

Since starting school 8 years ago, Ben has continued to excel at school and has a bright future. Above all, what he most wants to do when he finishes school is to inspire other children from Namuwongo to create a future for themselves.