A Story of Hope - Meet Derrick 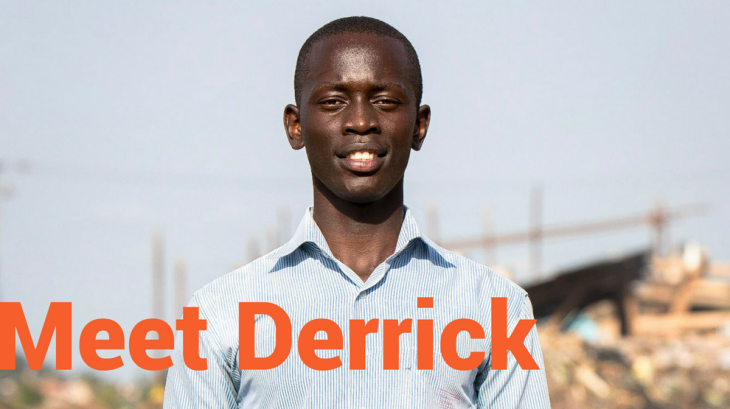 Derrick is a courageous 16-year old boy from the slum of Namuwongo in Uganda. He is an inspirational child who has faced significant hardship in his youth, not least because of his height, which has meant he has been bullied throughout his childhood.

Derrick’s parents both died when he was much younger. As an orphan his lack of confidence and self-esteem have been amplified, which has had a major impact on his life. He used to sleep on the floor of either his neighbour’s shack or that of his older sister, who wanted little to do with Derrick.

Hope for Children became aware of Derrick in 2013 through our social worker network in Namuwongo, and because of his extremely vulnerable situation, quickly made the decision to start supporting him.

However, we soon discovered that before going to school, he was doing chores for his neighbour, then going to his sister’s where he would also do house work. He felt he had to make some sort of payment in return for the chance to have somewhere to sleep.

We enrolled him onto the boarding class of our Walk to School programme, so that he could start attending school, providing him with a uniform and school books, and had a safe place to sleep. This was the first time Derrick had ever received new clothes and was a welcome alternative to the one tshirt and pair of jeans he had spent most of his childhood in. This, along with knowing that he now has a safe place to sleep at night has released a huge amount of stress from his life, and is helping to rebuild his confidence and self-esteem.

The one cloud that continued to hang over Derrick’s head was that when it came to visitor’s day, as an orphan, no one ever came to visit him. This was until 3rd April 2016. Wherever possible, we try to reconnect orphans with their extended families, and after many months of research and investigation we tracked down Derrick’s cousin Ochaka, who surprised him at school. Derrick burst into tears when he saw him. It was the happiest day of his life.

Since then, Derrick has gone from strength to strength at school, and although he is still effectively in primary school, he is progressing quickly and dreams of becoming an astronaut