A Story of Hope - Meet Radhika 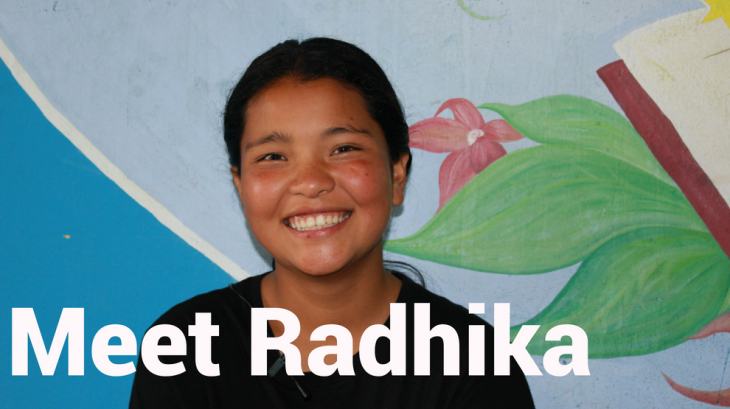 Radhika is a 15-year-old girl from Nepal. She lives with her parents and elder sister who is currently pursuing her bachelor’s degree in Kathmandu.

Radhika loves school and when she grows up, she wants to be a software engineer - a dream that is supported by her family, especially her father. He drives trucks, transporting construction materials, while her mother looks after the house and works in the paddy fields.

Radhika is a big believer in equality and wants everyone in her community to accept and support each other. Unfortunately, this is not the reality she lives in - women’s menstruation is still a subject that incites ancient discrimination. Menstruating women are thought of as impure and not allowed to enter the kitchen, touch cooking materials, or even touch men.

Although Radhika’s family doesn't strictly follow these traditions, other members of the community, like her uncle, notice and do not approve. In fact, this disapproval caused Radhika’s sister to have anxiety attacks whenever she had her period for fear that other people would notice.

Fortunately, due to a project that Hope for Children has recently started supporting, a lot has changed. Our local partner is working to remove the stigma associated with menstruation while also locally producing and supplying hygienic pads to menstruating women, a project which Radhika is a member of.

Despite initial apprehensions about joining the club due to fear of judgement, she has learnt about the importance of hygiene and most importantly, had fun actually making the hygienic pads, a process that involves boys as well as girls. As a result, the project has made significant progress in removing the taboo surrounding menstruation among the Nepali youth.

Education makes a big difference in a country where only around 60% of people over the age of 15 can read and write. In places with no schools, it is seen that these traditions are stronger, with women facing greater levels of oppression. In West Nepal, menstruating girls are banished from the household, where they are unsafe and face the risk of rape or death.

Radhika has realised that it is extremely important to actively challenge traditions such as these, and now she adamantly refuses to follow them, regardless of what others say. She is frustrated by the discrimination that women face even though they are equal, productive members of the community.

Now, Radhika is determined to succeed in her life, proving that she can excel despite all the systemic barriers against her gender.